Black Friday and the rest of the holiday shopping season is often the make or break period of the year for retailers.

Regardless of what you think of all the hype, stores really do rake in a lot of money around the holidays. Call it rampant consumerism fueled by corporate greed if you want to, but the spending is real.

The predictions and projections about how much money changes hands throughout the season, and on Thanksgiving weekend in particular, are often gaudy. And wrong occasionally, of course.

But that doesn’t make it any less fun to gawk. So here’s a look at Thanksgiving, Black Friday and holiday shopping, by the numbers.

$616.9 billion: The total amount of sales expected during the holiday season of November and December.

6: As in 6 a.m. As in the time Kmart stores will open on Thanksgiving morning.

42: As in Kmart stores will be open 42 hours straight from the time they open on Thanksgiving to the time they close at midnight on Black Friday.

140.1 million: The number of people who definitely will or might shop over Thanksgiving weekend.

95.5 million: The number of people who will or may shop on Black Friday.

25.6 million: The number of people who will or may shop on Thanksgiving.

44: The percentage of holiday shopping the average consumer will do online.

$718: The average amount consumers will spend on the holiday gifts in 2014.

61: The percentage of consumers planning to shop in a physical store on Thanksgiving or Black Friday.

45: The percentage of people who plan to shop on Thanksgiving Day.

49: The percentage of people who started or planned to start their holiday shopping in September.

‘Tis the season … to shop. The holidays may still be a few months away, but consumers are already gearing up for the year’s biggest shopping season. They’re searching for deals and checking them twice across a variety of screens (mobile, increasingly). Given that the holiday shopping season kicks off earlier every year, we wanted to help get a game plan in the hands of marketers. Here we take a look at some seasonal highlights from last year and identify five key trends to make the year’s busiest retail season a successful—and joyful—one.

1. Mobile: the gift that keeps on giving

From research to purchase, holiday shoppers are increasingly turning to mobile. Looking at usage from last year, there’s little doubt that smartphones have become almost as addictive as eggnog.

As seen in our piece on Back to School, the second-most popular shopping event of the year, mobile plays an essential role in the shopper’s journey. Given last year’s holiday numbers, we expect this trend to escalate—and not just for research and/or purchase but for the entire path. According to a Google/Nielsen study on the Mobile Path to Purchase:

Last holiday season, shoppers seemed hungrier for a deal than they were for turkey. Black Friday transformed into Gray Friday; the big shopping day’s sales were diluted a bit as retailers began their promotions and deals early. And consumers responded (some even ditching their family dinners to shop). Consequently, we’re starting to see a shift away from “tentpole” events such as Black Friday. “Retailers stretched Black Friday deals and promotions across November—removing the focus from one big day of shopping,” reports Shopper Trak’s founder Bill Martin. A Google Consumer Survey conducted in July shows the following: 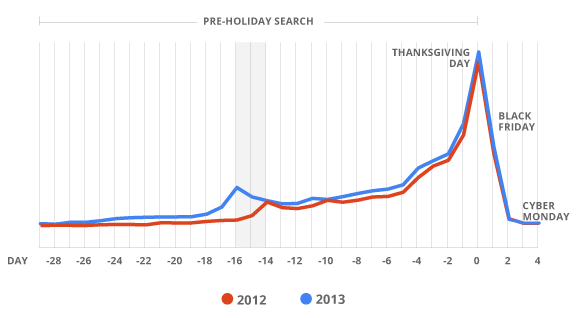 Black Friday remains the #1 in-store shopping day during the holiday season. The next best days, according to a 2013 MasterCard SpendingPulse report, are December 21 and 23. Tuesdays and Wednesdays are the most popular days for online shopping, and Fridays and Saturdays are the top days overall for in-store holiday shopping.

O, come all ye faithful—and savvy—shoppers. This holiday season, shoppers are more informed than ever about their purchases. Long before the swipe of a credit card, they’ve been pondering and researching purchases for hours on many screens and during every hour of the day.

Many of these informed and educated holiday shoppers are brand agnostic. In other words, they’re open to influence, and that’s music to a brand’s ears. A study about 2013 post-holiday shopping by Google and Ipsos MediaCT shows that 57% don’t yet have a specific brand or product in mind. But capturing the attention of shoppers who hunt for holiday gifts across many different screens can be a challenge. Brands need to pinpoint the best platforms on which to share engaging content and promotions with consumers. YouTube is a stand out for shoppers: 64% referenced the video site as the most influential channel for making shopping decisions. Creators such as Bethany Mota are particularly persuasive; 85% of the views for brand-related content on YouTube stem from YouTube creators rather than directly from the brand.

4. In-store traffic is down, but the spirit of spending is up

In January, The Wall Street Journal reported that foot traffic to stores in November and December plunged from 38 billion in 2010 to 17 billion in 2013. But the fact that consumers may have made fewer visits to retailers, that doesn’t mean overall sales were down. In fact, retail sales for that same period increased from $681 to $783 billion. So, although fewer people shopped in-store, those who did bought more, adding value to each visit.

Increasingly, shoppers are relying on their smartphone while making that in-store visit. A 2013 Google study done in conjunction with the Google Shopper Marketing Agency Council and M/A/R/C Research tracked mobile’s impact on the in-store shopping experience. The research showed that 84% of smartphone shoppers use their device while shopping in a store, and one in three will use it to find the information they need rather than ask an employee (Chart 2). 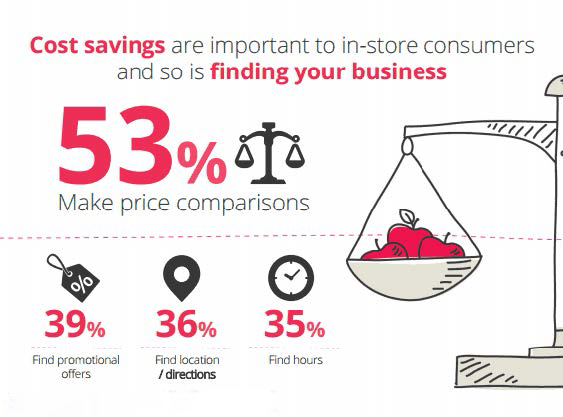 5. Deck the halls with deals

We already know the holiday shopper is smart and keen on research. A good deal on price and shipping will have them reaching for their wallets.

The holidays are closer than you think—especially for digitally savvy consumers. They’re already on the lookout for great deals, and that means you need to be where they are … now. This year’s holiday shopping season is geared to be a long one, bustling with well-informed shoppers who are as keen on a digital deal as they are for more traditional in-store shopping. This year, as you add ingredients to your seasonal marketing mix, be sure to take these five holiday trends into account:

A commercial real estate boom is underway in Santa Clara County and south San Mateo County, with developers constructing or renovating roughly 6 million square feet of office space — double the activity of a year ago.

Most of the new space won’t be empty long. More than one-third of the office and research space under development already has been gobbled up by tech firms eager to expand.

Some 4.9 million square feet, or 79 percent, of the current building activity consists of new office space, Jones Lang LaSalle estimated. The rest, about 1.3 million square feet, involves a major renovation of existing buildings. The figures include a 500,000-square-foot complex in Mountain View leased this month to Google and the 434,000-square-foot Facebook West Campus in Menlo Park.

Tenants have already agreed to lease 39 percent of the 5.7 million square feet, even before it’s complete, Jones Lang calculated.

Google, LinkedIn, Facebook, Amazon, Apple(AAPL), Samsung and Dell are in the pack of companies hunting for space, Mahoney said.

“We see a lot of optimism about growth on the part of the biggest tech companies and a lot of smaller ones,” said Chad Leiker, a vice president with Kidder Mathews, a realty firm.

Geographically, the commercial real estate boom has pushed from north to south. A slew of leases and property purchases by Apple, Facebook and Google have gobbled up available space in Cupertino, Mountain View and Menlo Park, causing a leasing surge in Sunnyvale, Santa Clara and, now, San Jose.

But not every Bay Area commercial real estate market is booming. The East Bay has virtually no developer-launched construction, Schiada said.

In addition to building new space, developers are spending tens of millions of dollars to renovate existing buildings, giving decades-old properties a fresh start. The face-lifts are necessary because tech firms want attractive offices to help them recruit top-flight engineers being wooed by multiple tech companies.

“Developers who don’t renovate their older buildings will be left standing on the curb,” said Jim Beeger, a Colliers senior vice president.

Some realty firms have torn down entire buildings to construct brand-new offices. In Sunnyvale, developers bulldozed several buildings, including offices and a hotel, to clear the way for a state-of-the-art LinkedIn campus totaling 587,000 square feet, typically enough for about 2,600 workers.

Other developers, including Bixby Land, are renovating existing buildings to create campuses. In April, Nimble Storage leased a three-building San Jose campus created by a $10 million Bixby renovation. And Bixby has just launched a renovation of a three-building project in north San Jose that will offer a sleek look for tech tenants. The developer added modern exteriors and interiors, along with a large common area featuring an olive grove and fire pits.

“We want to create a unique environment that most employers in Silicon Valley want,” said William Halford, Bixby’s president.

The Small Business Administration approved nearly $19.2 billion in 7(a) loans in fiscal 2014, the second-largest total in the history of this government-guaranteed loan program for small businesses.

This total was topped only by 2011’s $19.6 billion, when lending was boosted by fee waivers and higher guarantees adopted as part of the economic stimulus package.

(The SBA called 2014’s numbers a record in its news release, but we’ll have to forgive them for being overenthusiastic.)

Nearly 60 percent of these loans were for under $150,000. The number of loans of this size were up 23 percent in 2014, helped by the agency’s decision to eliminate fees on them.

The news wasn’t so good for the SBA’s 504 loan program, which is primarily used to finance owner-occupied commercial real state. The SBA approved only $4.2 billion of these loans, the lowest total since 2009. These loans peaked in 2012, when a temporary program allowing businesses to use 504 loans to refinance their existing commercial real estate mortgages was in effect.